How Are Solar Panels Made?

22nd March 2018 by admin in category Blog tagged as ingots, panels, polycrystalline, silicon, solar with 0 and 7 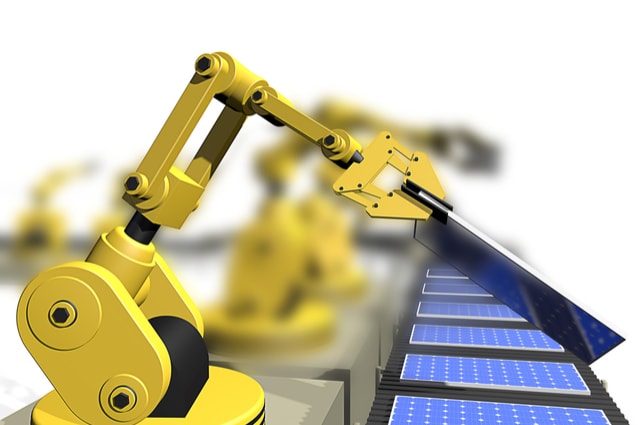 How are Solar Panels made?

Solar panels are installed in roofs of many people houses. The most attractive thing about them is that once bought, no one will ever charge you any other fee. The effectiveness of solar depends on what components it has. Typically, they include a set of solar cells that efficiently enable the conversion of solar energy into the electrical energy. But have you ever thought about how they are made? Check the processes below:

First, you need to understand the materials used to make solar panels: silicon is used in the making of panels for its conductive roles. The materials are only usable after purification. Usually, cleaning involves heating and melting. The silicon is turned into cylindrical shaped solid and is referred to as ingots in this shape. The ingots are developed as a result of dipping silicon crystals in polycrystalline silicon. The melted polycrystalline absorbs the impurities.

Then the made ingots are separated into wafers with 5mm thickness. A doping process is then involved whereby phosphorus and boron are added to heated wafers. The wafers are cut in a specific order with constant dimensions. The crystal is then cut into squares using a slicing machine to ensure the four sides of the wafers are all straight. The squared portions are farther sliced using a wire saw. The saw is made such that, it consists two drums whether the said strings are wind up on the drums.

The stage involves etching the wafer. The wafers are then converted into productive cells. Heating follows the conversion at chemical treatments. Etching is done to remove a layer of silicon to expose the underlying texture. Then you will be required to diffuse the waffle on a thin layer of phosphorus. The cells are placed in the trays where a blue-purple silicon nitrate is applied to the top of the crystals.

After all the phases of production, the final process requires assembly. The resulting product of this process is the PV cell; the cells need soldering. Assembly involves merely the creation of modules containing several cases. For 60-cell modules, the PV wafer-cells are first patched into strings of ten (10) in an over-under-finished under the instance of metal connectors connecting every phone. In six (6) strings, a rectangular grid of 60 cells is made. Each of these square grids is then overlaid onto the glass. The casing is necessary to secure the safety and protection of the solar panels.