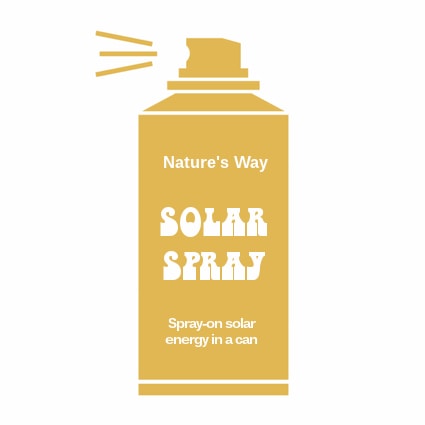 The future of solar panels? A can of perovskite film. Based on an image by 007NATALIIA.

For several years, we have had squeezy cream and spray-on deodorant. Then came spray-on fake tan and vegetable oil. Soon to follow could be spray-on solar panels. At present, silicon based panels need to be installed. By the end of this decade, they could sprayed onto a roof. How is this possible? The spray can will be used to spray perovskite crystals onto your roof.

Where perovskite has the upper edge on silicon-based solar panels is expense. Perovskite solar cells are cheaper. The fact it can sprayed out of a can as well as applied to thin film makes it more attractive for vehicles. In future years, the sunroof could be a sunroof in more ways than one. The car roof could take over from the battery for powering the vehicle’s electrics.

This development, reported on the Bloomberg website, is not without its initial teething troubles. It is still some way off reaching the mainstream due to one main problem: fading. The spray-on solar panels have a propensity to fade over prolonged periods of time. Once that has been sorted out, spray-on solar energy could be ready for the shelves in late 2018.

Ultimately it will drive the cost of solar energy down, and bring it to more affordable prices for households. They’ll probably be sold in big drums or tanks with an applicator nozzle. Smaller versions in spray can form (as seen in our image) could be aimed at electronics enthusiasts and sold for £29.99 for 500 ml worth at Maplin. Who knows how? It’s a fascinating move.